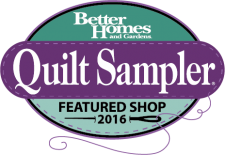 HIstory of the 1930's Feedsacks

Feed sacks bring to mind poverty of the Great Depression but at the same time there is a romance
to the idea that women could make something beautiful from something so mundane.

In truth feed sacks were used for sewing well before the depressions and for several years after.  The evolution of the feed sack is a story of ingenuity and clever marketing.

From Barrels to Feed sacks
Initially farm and food products were shipped in barrels.  The feed sack story starts in the early 1800’s, when goods such as food staples, grain, seed, and animal feed were packed for transportation and storage in tins, boxes, and wooden barrels.  This was not an ideal method of storage as tin would rust and the hand made boxes and barrels leaked and were damaged easily.  They were bulky, heavy and difficult to transport.  Between 1840 and 1890 cotton sacks gradually replaced barrels as food containers.  In 1846 the invention of the “stitching machine” made it possible to sew double locking seams strong enough to hold the contents of a bag.  Feed sacks were initially made of heavy canvas, and were used to obtain flour, sugar, meal, grain, salt and feed from the mills.  They were reusable, with the farmer bringing an empty sack stamped with his mark or brand to the mill to be filled.  This changed when the North East mills began weaving inexpensive cotton fabric in the late 1800’s.  Feed sacks (or feedbags) were initially printed on plain white cloth and in sizes that corresponded to barrel sizes.  For example, a one barrel bag held 196 pounds of flour.  A 1/8 barrel bag only held 14 pounds.  The brand name of the flour was simply printed on the side of the bag.  Many of the logos on the flour sacks were circular, a legacy from the time when these logos had to fit on the top of a barrel.  Women quickly discovered that these bags could be used as fabric for quilts and other needs.

Cotton had been king until the period of 1914 to 1929 when the price dropped out of the cotton market partially because synthetic fabrics like rayon became popular for dresses and undergarments.  With the drop in the price of cotton even more companies began using cotton sacking as packaging.

It took a while for feed and flour sack manufacturers to realize how popular these sacks had become with women.  Eventually the saw a great opportunity for promoting the use of feed sacks  First feed sacks began to be sold in colors then, around 1925, colorful prints for making dresses, aprons, shirts and children’s clothing began to appear in stores.  Manufacturers began to paste on paper labels making it far easier to remove them.  By the late 1930s there was heated competition to produce the most attractive and desirable prints.  Artists were hired to design these prints.  This turned out to be a great marketing ploy as women picked out flour, sugar, beans, rice, cornmeal and even the feed and fertilizer for the family farm based on which fabrics they desired.  Some sacks displayed lovely border prints for pillowcases.  Scenic prints were also popular.  Manufacturers even made preprinted patterns for dolls, stuffed animals, appliqué and quilt blocks.

It was not hard for the farmer to purchase his goods in feed sacks  The flour industry consumed the largest share of the feed sack market with more than 42 percent.  Sugar was next with 17 percent followed by feed, seeds, rice, and fertilizer.  These feed sacks came in different sizes, and the quality of the cloth varied with the item it carried.  Sugar sacks, for example, were much finer in weave.  By 1914, sacks came in 10, 6, 4, 3, 2 and 1 pound sizes, although these sizes varied by manufacturer.  President Roosevelt standardized sizes in 1937.  A 50 pound feed sack measured 24 x 38 inches.  A 100 pound sack measured 39 x 46.

Those who found they had more feed sacks than they could use were able to sell them back to the store where they were then resold.  Chicken farmers went through a great many sacks of feed so the sale of feed sacks became a side business for some of them.

We usually think of feed sacks being a way women provided clothing and bed coverings during the economic hard times of the boll weevil depression in the south in the 1920s and the Great Depression that followed.  But actually printed feed sacks were used for sewing from before these depressions to well after World War II.  Even though the economy improved during the 1940s it was necessary to conserve because of the need for war supplies.  Using feed sacks for sewing was considered patriotic and women still enjoyed finding attractive prints on feed sacks  One feed sack could have easily made a child’s dress or shirt, and three identical sacks to make a woman’s dress.

Magazines and pattern companies began to take notice of feed sack popularity and published patterns to take advantage of the feed sack prints.  Matching fabric and even matching wrapping paper was available, too.  Directions were given for using the strings from feed sacks in knitting and crocheting.  A 1942 estimate showed that three million women and children of all income levels were wearing print feedbag garments.

It’s not as easy as you might think to identify feed sack fabric.  The paper labels were easily removed from a feed sack and even with older ones the label has often been removed.  A course weave is not a good indicator as fabric like this could also be bought off the bolt as well.  The best indicator is a line of holes from the chain stitching that once held the sack together.